In this guide, we are going over defensive tips 101 for Madden 21. All the basic information you need tov know on defense to make yourself a much better defensive player, while you will still need to learn some useful tricks to defend more effectively. Now let’s get into the Top 5 defensive tips, which can help you saving MUT 12 coins for buying top-rated players.

Tip 1. Make Sure You Match Personnel

The first thing we go over every year is you need to understand how to match personnel. So when your opponent calls a play, it’s going to pop up in the bottom hand of the screen and he got three wide receivers (one tight end, one run, one running back), or he has one wide receiver (two tight ends, two running backs). You need to wait for him to do this before you pick your play:

If he has two or fewer wide receivers, typically you need to stick with a 4-3 or a 3-4 type formation, because it’s just bigger bodies on the field & more people in the box.

If they’re coming out in two receivers or less, there’s a very high probability, that they’re going to be running the ball and you don’t want to come out and like a dime or a dollar defense when they’re running the ball because they’re going to gas you. However if they have three or more wide receivers that’s when you want to start looking at things like your nickel formations, your dime, and your dollar because these are going to have more cornerbacks on the field, and you need to match speed. For speed, you don’t ever want to end up in a situation where you have a linebacker having to check a wide receiver that’s usually going to be a speed mismatch the majority of the time. So always make sure you match personnel. Check out the upcoming Madden NFL 21 TOTY Promo here. 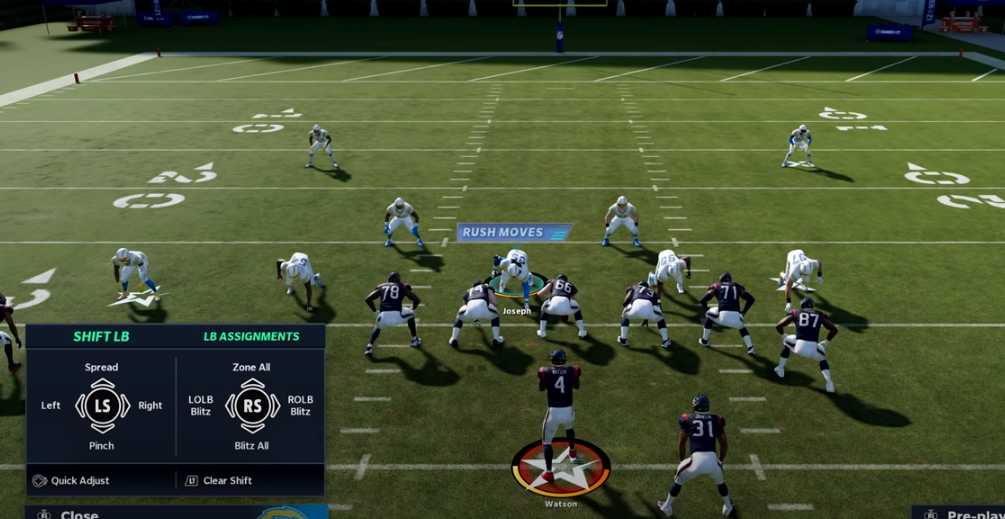 Next you have adjustments so let’s say you want to put players in adjustments. You can get on any player by hitting the A button on Xbox or the X button on Playstation, and you see you have different zone adjustments you can drop people in. You can drop this player into a hard flat, into a deep third, or put them in a spy.

Spy is a key adjustment right there, because when you have fast people like Deshawn Watson, if you put him in a spy you could see the player is going to spy on your opponent and not let opponent run, he’s going to be all over him. So when you’re playing fast QBs, you’re going to want to use that QB spy adjustment, it’s going to do a really good job at keeping the QB from running for easy yards.

That’s how you do any type of cover, just maybe you want to double team, you press A or X up on the right stick for man coverage, and then we can select Brandon Cooks (costing over 50k MUT coins in the market now) which is the X icon now. It’s just little adjustments you can make. You have other types of adjustments as well which you can do by pressing the RB or R1 button, this is a way that you can do things like run commit. However, we wouldn’t advise using it unless you’re on the goal line because if you guess wrong and they’re passing then you’re going to go up a touchdown.

Pass committing however is important, again pull this up you could see pass is up on the right stick. What that is good for is if someone’s using a play-action, your defensive line or anybody that’s rushing the QB will not get faked out by the play-action and they’ll keep pursuing the QB. It’s a really good tactic versus people that like to use play-action.

Another very important adjustment here is the QB contain which you can see is the RB or R1 button, this is another way to contain mobile QB’s. Because maybe you don’t want to put a spy on the play but you don’t want your QB or the opponent’s QB to just go outside the pocket, well you can’t get outside because those outside players will not go to try to rush the QB rather they’re going to play the edge and disengage.

The last thing you want to be aware of is your coaching adjustments, this is something you can pull up at your play call screen.  What coaching adjustments do? A lot of things especially this year very important these zone drop adjustments. Let’s say someone keeps hitting you with a deep crossing route or a deep corner out, you can adjust your zones to drop as far back as you want. If you have cloud flats on the field, you like to play cover two but those cloud flats somehow a corner out just keeps getting over the top of it, you can go to your zone drop coaching adjustments. If you like to run a lot of cover 3 and a corner out or a deep crossing route just keeps getting to the sideline over your curl flat defenders which are the purple zones in the slot. However far back you need them to go, this is going to give up more ground underneath but if someone’s abusing with those deep routes to the sideline, this will make those zones drop really far back and contain them. You can do the same thing with your hook zones which are usually your linebackers over the middle and those yellow zones.

Another thing you can do with your coaching adjustments is you can do your cornerback match up, you can match them up by overall meaning. Your highest-rated cornerback will match up versus the highest-rated receiver, you could do it by speed, by height, by route running, or by depth chart; or you could just leave it bound. So that’s a good skill or not a skill but a good adjustment to use.